Mirzo Muhammad ibn Shahrukh ibn Timur Ulugbek Guragan is a great astronomer and mathematician, an outstanding scientist of his time, statesman, grandson of the famous ruler and military ruler Amir Timur. In the years 1411-1449 – reign of Mawara’unnahr.

Ulugbek (Muhammad Taragai) was born on 22 March 1394 in the city of Sultaniya in the territory of today’s Azerbaijan.

In 1405, after the death of the great Sahibkiran, a huge state created by him, which, in addition to Central Asia, covered the entire territory of the Near and Middle East from the Mediterranean to northern India inclusive, passed to his sons and grandchildren. At the head of the Temurid dynasty was Shakhrukh, the son of Temur, who chose Herat as his residence.

Mawara’unnahr was left to Shahrukh’s eldest son, Amir Temur’s grandson Ulugbek. In 1409 Ulugbek was declared ruler of Samarkand and in 1447, after the death of his father, Shahrukh became the head of the Temurid dynasty.
From his youth Ulugbek showed a great enthusiasm for science and arts, especially mathematics and astronomy. His intellectual attitude was strengthened by the rich library of his grandfather and his father, where he spent most of his time.

Mirzo Ulugbek received a brilliant education by the standards of the time. He had an excellent memory, spoke fluent Arabic and Persian, had a good knowledge of Turkish (Old Uzbek) poetry, knew the theory of literary styles and took part in literary debates. He wrote poetry himself. Ulugbek’s teachers were outstanding scientists who became famous through Temur’s court, among them the mathematician and astronomer Kazizade Rumi. He showed the nine year old Ulugbek the ruins of a famous observatory in Maragha (South Azerbaijan). Perhaps it was this childhood impression that determined the choice of the future astronomer.

Under Mirzo Ulugbek, Samarkand became one of the world centres of medieval science. Here, in Samarkand in the first half of the XV century, around Ulugbek a whole scientific school was founded, which united prominent astronomers and mathematicians – Giyasiddin Jamshid Kashi, Kazizade Rumi, Ali Kushchi. In Samarkand at that time lived the historian Hafizi Abru, who wrote a remarkable work on the history of Central Asia, the famous physician Mavlono Nefis, the poets Sirajiddin Samarkandi, Sakkaki, Lutfi, Badakhshi, etc. The school was attended by a number of prominent astronomers and mathematicians. They were advanced people of their time, who believed in the power of the human mind, in the power of science.

In 1417-1420 Mirzo Ulugbek built a medresse in Samarkand, which was the first building of the Registan architectural ensemble. Mirzo Ulugbek invited many astronomers and mathematicians from the Islamic world to this madress. The other two madrasahs were built in Gijduvan and Bukhara. The madrasahs built by Ulugbek served as universities. On the portal of the Ulugbek madrasah in Bukhara the inscription “The desire for knowledge is the duty of every Muslim” has been preserved.

But the passion of Mirzo Ulugbek was astronomy. The creation of an observatory was a life-task for Ulugbek and his astronomer colleagues like Kazizade Rumi, Jemshid Giyas-ad-din-al Kashi, Ali Kushchi and others.

The size of the sextant, its successful design and the scientific knowledge of Ulugbek and his colleagues made precise astronomical observations possible. The main work of the Ziji Guragan Observatory, Ulugbek’s star charts, was compiled under the direction and with the participation of Ulugbek’s great astronomer. The catalogue contains the coordinates of 1018 stars, which were defined by this observatory in Samarkand for the first time after Hipparkhus with incredible accuracy. The compilation of the astronomical catalogue is an outstanding contribution to the treasure trove of astronomical science worldwide.

The observatory also carried out work to determine the inclination of the ecliptic to the equator and the length of the sidereal year; to calculate the sine value from one degree – an important astronomical constant – to the eighteenth decimal place!

Mirzo Ulugbek checked his data many times and concluded that his figures were correct. In 1437 he determined the length of the astronomical year: 365 days 6 hours 10 minutes 8 seconds. As it turned out later, the measuring error was only 58 seconds. If we take into account that the length of the astronomical year is 31 million 558 thousand 150 seconds, it becomes clear with what high accuracy Ulugbek made measurements.

As a great scientist Ulugbek was a weak military commander. He spent most of his time in an observatory and little time on public affairs. Mirzo Ulugbek’s eldest son, Abd al-Letif, who was influenced by a radical section of the clergy, declared war on him. The son offered his father a pilgrimage to Mecca. On the way to Mecca, Ulugbek was treacherously killed in 1449 by a decision of the Sharia court.

After the tragic death of the great Ulugbek, the reactionary part of the clergy provoked a pogrom of the observatory. The scientists who worked at this outstanding scientific centre were disbanded. The most valuable library was looted, the building was looted. At the end of the XVII century nothing was left of it.

But with the death of the great astronomer his bright star did not die out. The faithful disciple of Ulugbek Ali Kushchi, who was forced to leave his home Samarkand, brought the star book “Ziji Guragan” to Europe. Later it passed into the possession of many generations of scientists. The name and works of Ulugbek became known among scientists in Europe and Asia. In the “Catalogue of the Starry Skies”, published in Europe in the 17th century by Johannes Hevelius, there is an engraving that represents a symbolic collection of the greatest astronomers in the world who lived at different times and in different countries. They sit at the table, on either side of the muse of astronomy in Urania. Ulugbek is also depicted among them. The author of the engraving depicted Ulugbek without having his portrait.

Ziji Jadidi Guragani or the New Guragan Astronomical Tablet is rightly considered Ulugbek’s main scientific work. After thirty years of painstaking work and astronomical observations, the author completed this work in 1444. The Astronomical Manual was soon translated into Latin and, together with the astronomical tables of Claudius Ptolemy Almagest and King Alfonso XV, was a guide to astronomy in all the observatories of Europe.

The accuracy of these tables surpassed anything previously achieved in the Orient and in Europe. It was not until the XVIIth century that Tycho Brahe managed to achieve and then surpass a comparable accuracy with the observations of Samarkand. It is not surprising that the Ulugbek zije constantly attracted the attention of astronomers both in the Orient and in Europe.

“The Ulugbek Ziji consists of four major parts. The first, called Chronology, contains the explanation of the methods of chronology accepted by various peoples of the Orient. The second describes the questions of practical astronomy, the third provides information about the visible movements of the celestial bodies based on the geocentric system of the world, and the fourth is devoted to astrology – an inevitable tribute of science to the medieval world view.

The catalogue of 1018 stars, calculated by Ulugbek, is a compass for astronomers and historians studying ancient chronology. The star charts of Ulugbek confirm the truth of Ptolemy’s Star Atlas in “Almagest“.

In 1648 in Oxford – one of England’s oldest scientific and cultural centres – the main work of the famous Samarkand Observatory of Ulugbek was first partially published. The work was prepared for printing and commented by John Grieves (1602 – 1652), professor of astronomy at Oxford University. Later fragments of the catalogue were published several times in England.

The publication of Ulugbek’s tables in Europe coincided with the period when the original star catalogues, whose compilation required great and persistent observation and calculation, were numbered in units and were highly valued by celestial researchers. They were of great practical importance because the methods of orientation on the surface of the earth have always been based on observations of stars. Site selection, on the other hand, was particularly necessary in view of the rapid development of navigation after major geographical discoveries.

25 years after Hyde’s Oxford publication, Ulugbek’s table data find their place on the pages of the book “Prodromus Astronomiae” by the outstanding Polish astronomer Johannes Hevelius (1611-1687), published in Gdańsk Here they are compared with data from other catalogues available at that time: Ptolemy, Tycho Brahe, Riccioli, Prince Gus and Hevelius.

It should be noted that there are dozens of manuscript copies of “Ziji” in the book depots of Europe and Asia. The star tables of Ulugbek were the last word in medieval astronomy. These tables were the highest level of medieval astronomical science before the invention of the telescope. 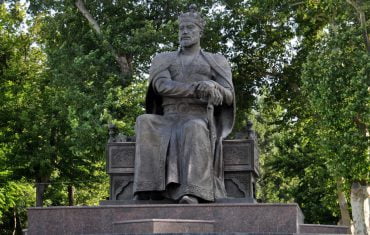