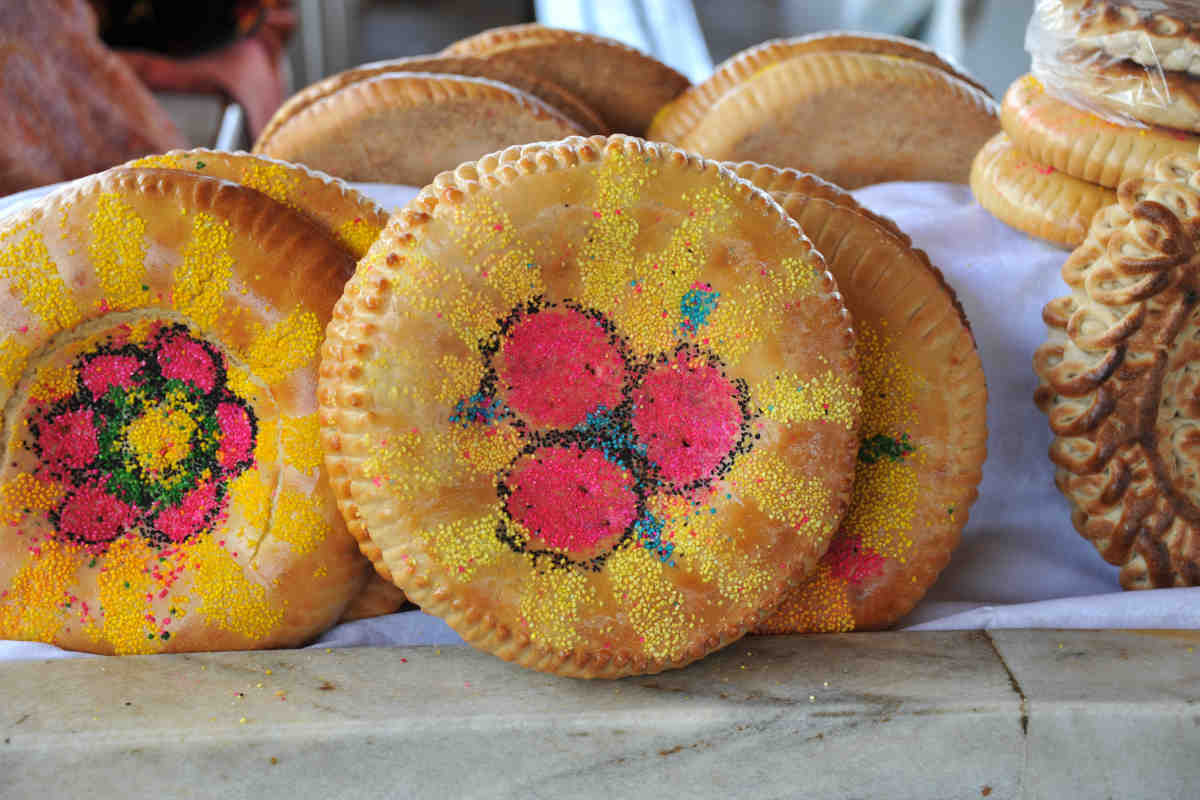 It is impossible to imagine the daily Uzbek diet without a gastronomic miracle – the hot tandir bread “issik non”, or colloquially: flat bread, unique in taste and nutritional value and never boring. Everyone who has tried it once loves it forever. And how Uzbeks, far from their homeland, long for phenomenon – Uzbek bread! But what do we know about this healthy bread, except that it is incredibly delicious and “you can’t get it anywhere else”? What is its secret…?

There is a legend according to which the Emir of Bukhara, having once tasted a surprisingly delicious flatbread from Samarkand, commissioned the best baker in Samarkand to bake the same flatbread in Bukhara. The baker carried out the order, but the taste of the finished cake was different from that in Samarkand. The angry emir called the baker to account. In his defence, he said, “There is no Samarkand air here…”.

The role of air is certainly exaggerated, but there is certainly a grain of truth. Besides mastering the unique traditional technology of Uzbek flatbread production, a baker’s mastery also depends on the place where he works, on how well he can adapt over time to the local water, the flour, the climate, his own oven….

Most Uzbek flatbreads are baked in a special oven – tandir. Baking in the tandir is one of the keys to achieving unique bread qualities. Ready flatbreads in a tandir reach their final state in 4 to 8 minutes. They are removed from the oven with a special scoop or mitten in one hand and a slotted spoon in the other. Sometimes the flat bread falls off the wall during the baking process and falls into the ashes. This bread is considered sacred. It is believed that at this moment the holy Khyzr has entered the house and the bread “bows” to him.

The most common type of Uzbek obi-non is baked from simple dough based on a special sourdough used only for this type of bread. The unique taste of obi-non depends mainly on it. The yeast culture propagated in this sourdough is as unique as the yeast culture of Borodino bread – i.e. it cannot be replaced by any other.

The Obi-Non dough is made either with purchased sourdough or by growing the required yeast cultures yourself. According to an old recipe, a thick meat broth is mixed with finely chopped onions and sour milk (for the production of which a proprietary yeast culture is also used) and kneaded into flour. After sixteen hours of fermentation, the yeast culture is multiplied by diluting it with warm water until it liquefies. Then the flour is added, the water is added and the dough is kneaded. Now the fermentation takes four to six hours. Knead the dough with sourdough, let it ferment for another forty minutes and then shape it into patties. For subsequent kneading, use the starter from a previous preparation, renewing it at least every 8 to 10 days. Often a piece of “ripe” dough from a previous preparation, called hamir turush, is used as a starter.

Traditionally, sourdough is highly revered among the Uzbeks and kept in a clean and secluded place. It is considered a sin to sit on it with outstretched feet or to step over it. Some exclusive sourdough recipes are kept secret by master bakers and only passed on to their apprentices.

After fermentation, the dough is divided into equal-sized pieces that are formed into balls, and these balls are then shaped into patties by hand. Before they are placed in the tandir, the thin centre of the flatbread is covered with a pattern that is pierced with a special tool called a chekish. This prevents the flatbread from deforming during baking. The raw tortilla is also sprinkled with sesame seeds, caraway seeds or poppy seeds.

There is an interesting historical fact related to hand-shaped flatbreads. In Central Asia, the local population bought lepyoshkas mainly from private home bakeries rather than from the state loaf of bread. This was contrary to the ideological guidelines of the time. And now, in the 1970s, the Ministry of Food Industry of the former USSR gave the RosNII bakery the order to mechanise the production of lepyshkas. The institute’s experts worked on the machine for a long time, but were unsuccessful: the shaping of the flatbreads could still only be done by hand. The idea was then abandoned, thank God. It is frightening to imagine what the ban on private trade in lepyshkas and the introduction of “uniform” lepyshkas in bakeries might have led to…

Thus, the traditional Uzbek lepyoshka once protected itself with its own shape. The variety of Uzbek flatbreads is impressive. Besides the most widespread obi-non and patyr, which are made from rich dough with the addition of lamb fat, there are unique varieties that are baked less frequently and therefore seem “exotic” even to many Uzbeks. At the same time, each region of Uzbekistan has its own special variety that cannot be found anywhere else. And each of them has its own sourdough, its own original preparation technique and its own unique taste.

For example, the sourdough for Shirmoy-non Lepyoshka is prepared in a pea-anise broth. Shirmoy-non is considered a dietary and even medicinal bread, it has a unique sweet taste with a delicate aniseed fragrance.

The flat bread Gala-osiyogi non, which comes from the village of Gala Osiye near Samarkand, is famous far beyond the borders of the Samarkand region. Every visitor to Samarkand tries to buy this bread when they leave the city: It has already become a tradition. There are more than fifteen varieties of this bread. Each variety has its own special and rather complicated recipe for sourdough based on fermented cream or whey with the addition of finely chopped onions and sesame oil. Even when the bread is old, it retains its beautiful appearance, and when it is soaked, it regains its flavour.

The Ferghana Valley is famous for its delicious puff pastry called katlama, where each layer is spread with butter or sour cream.

They also make scones with zizzali non, scones made with corn flour zoghora non, scones on a herbal tea kuk patyr and many other varieties.

Traditionally, lepyoshkas are not cut with a knife but broken by hand. Table etiquette forbids placing broken pieces of flatbread face down: This is considered disrespectful to the bread.

There is a custom for a traveller leaving home to take a piece of flatbread with him and keep it at home until he returns. And to cement the marriage ritual during an engagement, for example, a special rite of breaking bread is performed.

Since ancient times, bread has been considered a blessing from God in Uzbekistan and is highly revered. Bread is the head of all things. And the traditional Eastern custom of placing a basket of bread on one’s head, which is unfortunately so rarely seen today, is the clearest proof of this.