Khiva is one of the largest and oldest city centres of the agricultural oasis of Khorezm, which is located in the lower delta of the river Amudarya, south of the Aral Sea, in western Central Asia. This is also where the Kyzylkum desert begins. The history of Khiva is not clearly known when the city was founded on the site of today’s Uzbek Khiva. It is estimated that it was founded more than 2.5 thousand years ago, although the first mentions in written sources are from the 10th century.

The travellers of that time stated that Khiva was situated on a caravan route from Gurganch to Merv (the present names of these cities are Kunya Urgench and Mary). Khiva was founded in VIII. century mainly a Muslim city.

In 712 it was conquered by Qutaiba ibn Muslim, the governor of the Persian Khorasan region. In the following centuries Khiva, together with the state of Khorezm, was under the control of various ruling dynasties of the Muslim world – the Arabs, Seljuks and Anushtinids.

In the period from 1097 to 1231 there was a state of Khorezshakhs, to which Khiva belonged. However, the supreme power of this empire, which extended over the territory of today’s Uzbekistan, Turkmenistan, South Kazakhstan, Iran, Azerbaijan, Afghanistan, Tajikistan and Kyrgyzstan, was suppressed by the Mongol invasion.

In 1220 the state of Khorezm was literally wiped out by Genghis Khan’s troops and Khiva was destroyed. In 1511 the Shaybanid dynasty ruled in Khiva Khanate (this is what the Khorezm state was called in the last period of its existence).

1598 Khiva became the capital of Khiva-Khanate. The relocation of the capital from Urgench was due to the fact that the river bed of the Amudarja had changed and difficult living conditions had developed in the city: The citizens had lost a reliable source of water and access to the Caspian Sea.

The acquisition of the new status of Khiva gave the town a development impulse. It began to grow rapidly and subsequently became one of the educational and religious centres of the state. A special contribution to the development of Khiva was made by the Arabian Muhammad-Khan (died 1621), who ruled in 1603-1621 and made Khiva one of the most beautiful cities of the state, equal to Samarkand and Bukhara.

On the order of the ruler in 1616 in particular a madrasah was built in the city in honour of Khiva’s designation as the capital of the state of Khorezm. There are many folk tales about the history of Khiva and its name.

The first historical information about the history of Khiva is available in medieval sources. It is first published by the author of Istahri from the X century. century. The scientist and geographer Makdisi from the same period also reports about it: “Khiva is situated on a big road. It is a big city, which is situated on the bank of a canal. There are beautiful buildings and a mosque. Chivok or Chivak is a town and a fortress in the Khorezm region. The distance between them is 15 farces, and the people of Khorezm call it by the name of Khiva …”. Interesting information can be found in the works of Nizameddin Shomi (XIV century), Abdurazzaq Samarkandi and Merhond (XV century).

In the following centuries in the works of Russian and other foreign authors various information about the history of Khiva is given. Remarkable is some information in the work of Khudaiberdy ibn Kan Muhammad Zevaki entitled “Dilgaroyib”.

About the cities in Khorezm the author writes: “It was founded by the Prophet Noah and is known under the name of Kheyvak. It is also said that it hides the secret of the death of St. Pahlavan Mahmud and thus gave rise to the name of the city. This name is conditional and means a place filled with sand.

According to legend, Nuh stops here after the hunt and falls asleep. He dreams that he is surrounded by fire and wakes up in a good mood. The prophet builds a city at this place. The second time he builds high walls around the city and breaks through a well on the west side. According to the legend, Kheyvack was destroyed four times afterwards. Then it was rebuilt.

One of them attributes the foundation of the city to Noah’s son Sim, where it is said that Sim, who once wandered through the desert, fell asleep after the world flood and dreamt of 300 burning torches.

He woke up excited by this sign and founded a city in the shape of a ship, depending on where the torches were that he had dreamed of. Sim then dug a well called Kheyvak, whose water had an amazing taste. You can still visit this well today in Ichan-Kale (downtown Khiva).

The inhabitants of Khorezm have several times repulsed such famous conquerors as Alexander the Great. In 680, the Arab army led by Qutaiba ibn Muslim attacked Gurgandj (the former capital of Khorezm), but could not finally conquer the state.

A few centuries later, after a year’s siege, the united army of Genghis Khan managed to invade the capital of the powerful state of Khorezm Shahish-Anustegenid’s Gurgandj, while at the same time destroying the dams on the river Amudarya, causing the water of the stormy river to flow into the city, practically washing it from the ground.

But 200 years later the capital Khorezm has been revived. In the IXth to XIIth century In addition to many Muslim educational institutions, Khorezm was successfully functioning as a centre of science: astronomy, mathematics, medicine, chemistry, etc.

The most famous is the Ma’mun Academy of Khorezm, whose 1000th anniversary was recently celebrated by the whole world community under the leadership of UNESCO. Already in the 9th century Muhammad al-Khorezm’s fundamental works of mathematics, geography and geodesy were known in Europe without losing their importance until today.

The greatest scientific and cultural heritage was left by Al-Beruni, Agahi, Najmiddin Kubro and other scientists and theologians whose names are also connected with Khorezm. In the XIV century Amir Temur undertook five campaigns to Khorezm, but it was not until 1388 that he succeeded in conquering Khorezm completely.

With time Khorezm flourished again and in a short time became one of the spiritual centres of the Muslim world. After the foundation of the Khiva Khanate at the beginning of the XVI century Khiva became its capital in 1598.

The cityscape of modern Khiva is mainly characterized by the architecture of the epoch of Khiva Khanate at the end of the XVII to the beginning of the XX century, but the archaeological excavations carried out here show that a number of relatively “young” building remains are based on ancient layers from the III and even earlier centuries before Christ. 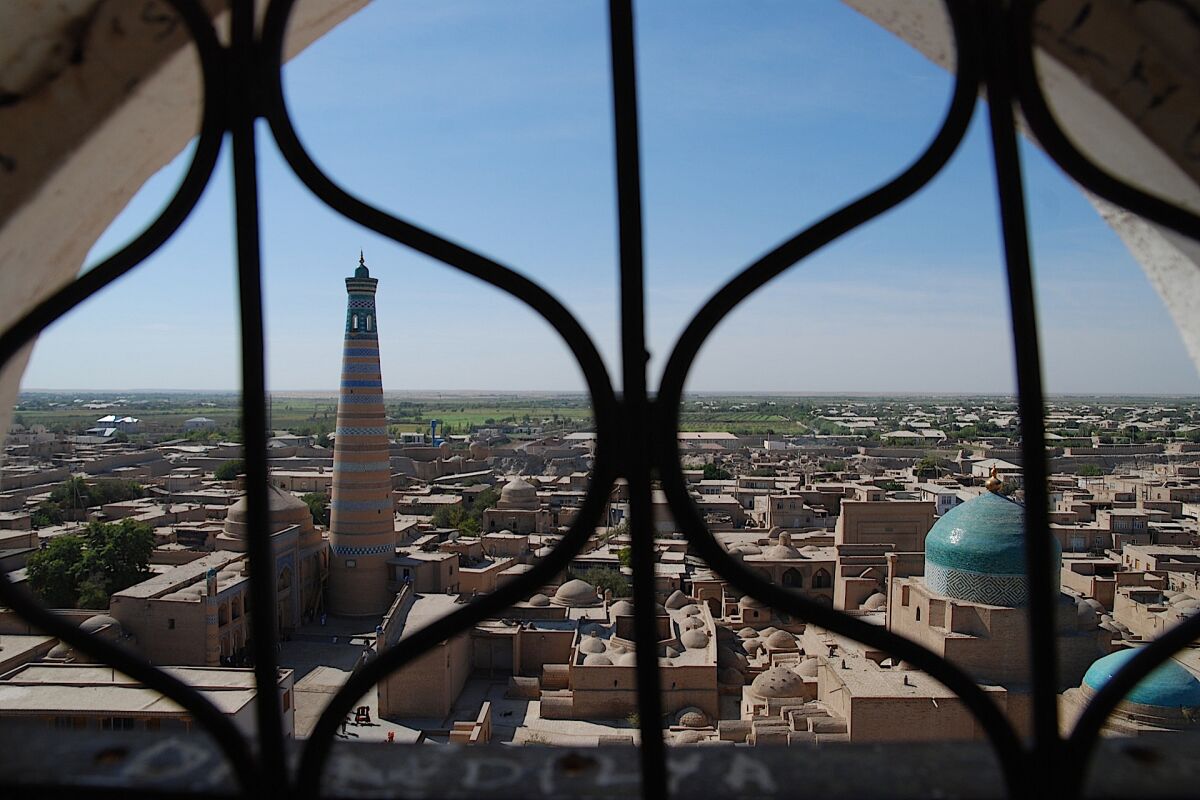 The architectural monuments of Khiva, which rightly bear the title “City Museum”, are among the unique works of international importance. In the list of works of universal value, Khorezm occupies a special place as one of the centres of world civilisation and an important centre on the Great Silk Road.

In 1873 Khiva was taken by Russian occupiers under the leadership of General Constantine von Kaufman, who had succeeded in conquering Samarkand five years earlier. As a result, a part of Khiva State was transferred to the Russian Empire and the territories became part of the Amudarya Department of the Turkestan region.

The Khanate of Khiva was finally dissolved in 1919, when the local authorities were overthrown by the Red Army. As a result, the Soviet People’s Republic of Khorezm was founded with Khiva as its capital, and in 1924 the land of Khorezm was divided between the Uzbek and Turkmen SSR.

In 1990, the city of Khiva was one of the first cities in Central Asia to be included in the UNESCO World Heritage List. In 1997, Khiva celebrated its 2500th anniversary under the auspices of UNESCO.